For the product I’m building (A portable electronic scoreboard), the enclosure is large; 18″x10″. This is pushing the limits of injection molding without using a giant press. It’s certainly too large for a 50 ton press, and the 200 ton is about right. I was looking for other options and wanted to try out thermoforming, which is also called vacuum forming. The theory is that you heat up a sheet of plastic, drop it over a mold, and then suck the air out between the plastic and mold so that the plastic gets sucked to the mold.

This is a much cheaper method of production, as well, because the tooling is much cheaper and easier to make, and the temperatures and pressures required are much lower. It is better for prototypes as well, because you can make a mold out of anything, including styrofoam, and get an idea for the feel of it.

Vacuum forming isn’t perfect, though; it’s only good for making shells because you are starting with a sheet. And the formed part still needs a lot of work afterwards, cutting the excess material around the part, adding side holes, sanding. There are tradeoffs, and I wanted to explore this option.

I managed to find a factory, though it turned out they didn’t do the thickness of material I wanted, or the type of material I wanted, and didn’t even have the machinery I needed. It was also a challenge showing him the design and telling him it was a prototype, and that I could make changes to make the design more manufacturable. There is definitely an expectation with factories that the designs you show them are set in stone and you need exactly what is on the paper, which has been a challenge for prototyping in China.

The trip wasn’t a total loss, though. I managed to get some photos and video of the process. This factory makes blister packs mostly, and packaging for bulk transportation of products. They use cheap thin materials and while fairly basic, they get the job done pretty well.

The entrance to the factory is a little less than stellar. This one occupied the third floor of the building. 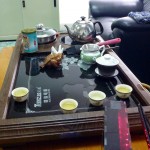 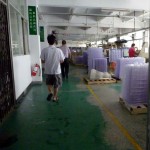 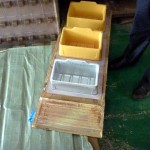 A look at their largest, thickest mold. Tiny holes in the aluminum allow the air to get sucked out, making the plastic form to the mold. 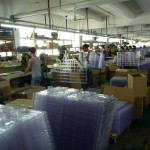 After forming, the sheets of material go to stations where they are cut out of the mold. 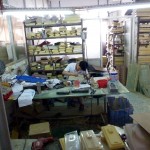 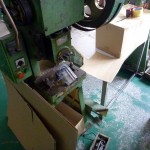 A very simple tool used to punch the required holes in the packaging. 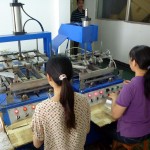 Two women take the material and run in through a machine which puts bends in the packaging around the card. The product will be inserted later.