Home › Uncategorized › Another perspective of the Electronics Market

Another perspective of the Electronics Market

Occasionally I get contacted by other people in or near Shenzhen who have also written about the craziness that is the Shenzhen electronics market. Here’s one such post. Mitch Davis has an interesting perspective about forming lasting relationships with people and how important it is to get a foot in the door and build a long term partnership with suppliers that will save more money in the long run than shopping around for the best price at that moment.

Sellers generally only want to do business if you’ve done business with them before, so it’s a chicken-and-egg situation. The reason is the Chinese concept of 关系 (guānxì, loosely pronounced as “gwunshee”, and even more loosely translated as “relationship”). …

One way to overcome this is to get an introduction from someone already doing business with them. The sociological theory is that neither side is unlikely to do anything stupid (like cheat) to the other, because it would reflect poorly on the introducing friend. And to put someone in a situation which makes them look bad is something you just don’t do in Chinese culture. 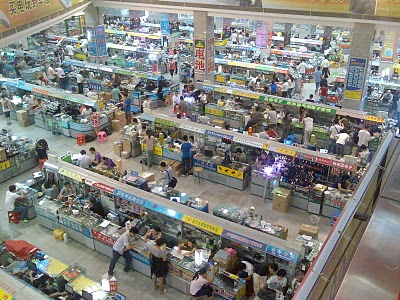 Read the full article for an interesting story of bootstrapping those relationships.