Home › Research › An attempt at a wireless safety device for firearms

An attempt at a wireless safety device for firearms

I was approached by a guy who recognized my wireless communications skills and proposed an idea to me. He had been thinking since the Sandy Hook shooting about how guns could be made safer, and thought that some kind of token that people wore that could disable weapons would be a great solution. Essentially he wanted to create a movement where people carried these tokens that emitted a disable signal, and he thought that governments could be convinced to mandate that all guns listen for this signal and refuse to fire when the disable signal is detected. That was where we started.

Evolution of the idea

Clearly this idea had problems. First was socio-political. Getting a government to mandate this would be impossible, getting people to trade in their guns would be impossible, preventing gun smuggling would be impossible, and establishing exceptions for military and police would be a loophole filled nightmare that would render the system useless. The next problem was technological. A token that’s always emitting a signal would run out of batteries quickly. A weapon that could automatically disable itself would be tricky. And a system that only deactivates if it hears a deactivate signal can easily be foiled by… aluminum foil. Wrapping the gun in aluminum foil would prevent the signal from reaching the antenna.

It took a lot of back and forth to come to a final solution, and it still has flaws. But we’ll get to that later. And I have no way to address the political or social problems; I’m a technical guy and that is a job for someone else. Here’s what we ended up with: 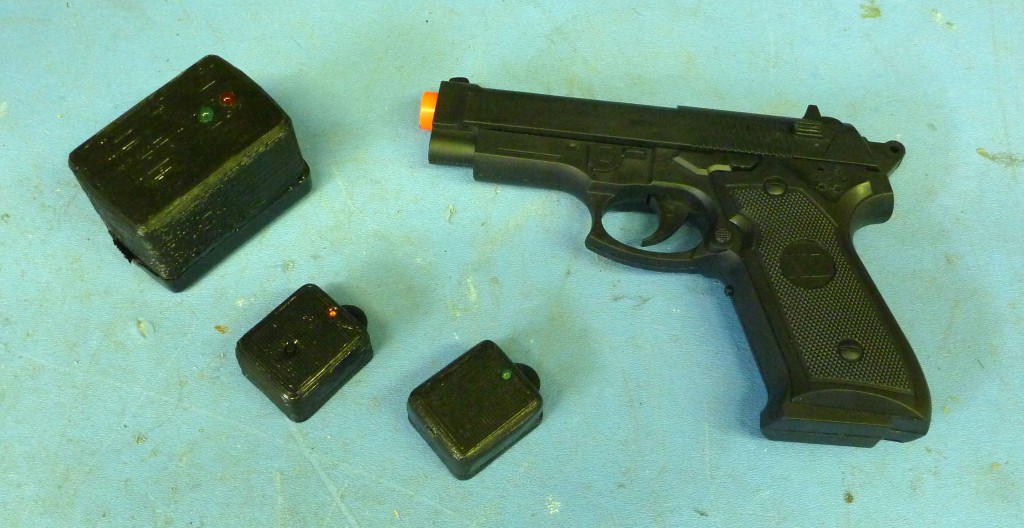 1) An enable token with a button that emits an ‘enable signal’ repeatedly while it’s turned on. We’re using Bluetooth Low Energy because this is exactly the sort of thing BLE was designed for. Low energy wireless communications. The enable token is paired with the weapon so that only that enable token can enable that particular weapon. This means the weapon will not enable unless the enable token is on, and within range. This prevents people from using stolen weapons, or getting into their parents’ guns, or accidentally firing, and can also prevent a gun from being used against its owner. This enable token alone is what makes this system great. There are far more accidental shootings, shootings with stolen weapons, and attacks against the owner than there are mass shootings, and an enable token paired to a gun would prevent a lot of those. But the enable token also serves another important purpose. Remember how you could just wrap a gun in aluminum foil so it doesn’t get any disable signals? Well if the gun needs to hear an enable signal, it can’t do that while covered in aluminum foil. So the fact that the gun has to hear a signal to enable means it must be capable of hearing a signal to disable.

3) A disable token that emits a ‘disable signal’ every few seconds. Essentially this beacon says to any specially equipped guns “please don’t fire near me.” Any weapon or enable token within range will immediately disable itself. Another advantage of using Bluetooth Low Energy is that many cell phones are now coming with BLE capability built in, which means eventually a cell phone could be emitting this disable beacon. So people wouldn’t need to carry an additional piece of electronics; it would be an app they could download and run in the background.

4) Finally, a fourth device can plug into a wall and emit a disable signal regularly. It could also be listening for enable signals that would indicate someone is trying to enable a gun. And if the gun were emitting a signal saying “hey, I’m a gun and someone is trying to fire me” it could listen for that as well. It would have a siren and possibly other ways to indicate authorities that a gun was trying to be used in a certain area.

I ordered some fake guns from Amazon, some Bluetooth modules from BlueGiga, and designed some parts for the enclosures. Writing the software for the Bluetooth modules, building the circuits, 3D printing the parts, assembling it all, and testing it, took a relatively short amount of time. A few weeks, really, and that was just in my spare time. It’s only prototypes, so I wouldn’t want to mass produce them the way I built them, but for a working prototype, it works and looks acceptable.

One thing I skipped was designing the electromechanical part that would prevent a gun from firing. I justified this by saying that many guns would be different in their implementation, and I don’t have a real weapon to develop for, and we were trying to prove the wireless concept.

Here are a few of the problems I ran into.

This is my contribution to the conversation. I built something that has the potential to solve some problems for some people. But after developing and considering the situations in which this might not work, and the motivations behind the gun makers, legislators, gun owners, and gun shooters, this system, and any other like it, has too many holes and challenges to make it a cure-all for gun control. We shouldn’t be applying technology like this to guns because it defeats their purpose and doesn’t solve the real problem that exists with the person holding a weapon.